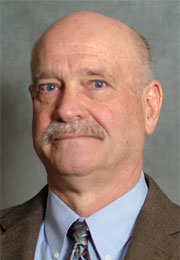 Bill Messenger works to find alternatives to plant closure and job dislocation, and when such closures and layoffs can’t be avoided, he helps the affected workers have access to job retraining and reemployment program opportunities available through the Workforce Innovation and Opportunity Act and the Trade Adjustment Assistance programs. He works closely with fellow Workforce Development Directors Kairie Pierce, Rachel McAloon and Emmanuel Flores, and Workforce Development Coordinator Karen White.

Unfortunately, Bill has firsthand experience in this area. His local union fought for more than a year to avoid closure of Weyerhaeuser’s Cosmopolis pulp mill.  His union’s sustained and creative efforts earned recognition in the form of the Mother Jones Award at the WSLC Convention in August 2006, but that September the plant closed and 200 hourly employees and a few dozen salaried employees lost their jobs.

Bill first became a union member with the Retail Clerks union while attending school and ultimately earned a Forestry degree from Grays Harbor College in 1975. Since then he’s been a member of the IWA, LPIW and AWPPW unions during his career in the timber industry. In the 15 years prior to joining the WSLC, he was active in Local 211’s leadership in various roles including Safety Steward, Vice-President, Standing Committee, and President for five years.

A longtime Grays Harbor County resident, Bill currently resides in Ocean Shores with his wife, Sue, an active member of AFSCME Local 970 who works for DSHS Home and Community Services in Aberdeen. They have four grown children.