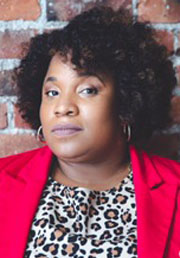 Cherika (she/her) was named Political and Strategic Campaigns Director in August 2019, filling the position vacated when April Sims was elected as the council’s Secretary Treasurer the previous year. Cherika previously served as the WSLC’s Field Mobilization Director, where she played a key role in the mobilization, development, and execution of the WSLC’s 2018 Labor Neighbor grassroots political efforts and in coordinating WSLC affiliates’ response to last year’s Janus Supreme Court decision attacking unions. Cherika has advanced the WSLC’s Race and Labor work and led the WSLC’s Union Summer internship program to help educate and train the next generation of union activists and leaders. She has and will continue in her new role to work with affiliates to recruit and train union members to run for public office thorough, Path to Power, our candidate training program.

As Political and Strategic Campaigns Director, Cherika helps the council develop and implement its strategic political plan, runs the WSLC’s Labor Neighbor grassroots political action program, promotes member education campaigns on election issues, and helps recruit and elect pro-worker candidates at the direction of the WSLC officers and its affiliated unions via the Committee on Political Education (COPE).

The activist bug first bit Cherika in 2011 as a Member Political Organizer of UFCW 1059. She was part of the team that overturned SB 5, Gov. John Kasich’s “Right-to-Work Is Wrong” bill, by taking it to a vote of the people of Ohio. After graduation from THE Ohio State University, Cherika went on to mobilize thousands of activists across the state to take action and win gains for working people as a Field Representative of the Ohio AFL-CIO.

Cherika is committed to fighting all forms of oppression, and advancing the freedoms of all working people.

In the struggle for justice, Cherika is guided by these words: Not needing to clutch for power. Not needing the light just to shine on me. I need to be one in the number as we stand against tyranny. We who believe in freedom cannot rest until it comes.