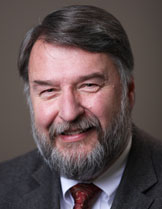 Jeffrey G. Johnson served as President of the Washington State Labor Council, AFL-CIO, from January 2011 to January 2019. He first joined the WSLC staff in 1986, serving as special assistant to the president, lead lobbyist, research and organizing director, and as shop steward for the administrative staff unit.

Jeff began his union life with Local 2190 of the American Federation of Teachers, AFL-CIO in 1979, teaching Labor Economics and Labor Studies at Empire State College, Center for Labor Studies, in New York City. As a labor educator Jeff taught in many union and community sponsored education programs in the New York area.

Jeff earned his B.A. in Political Science from Georgetown University and his M.A. and A.B.D. in Political Economy from the Graduate Faculty at the New School for Social Research. His wife is Rebecca Smith, an attorney with the National Employment Law Project.