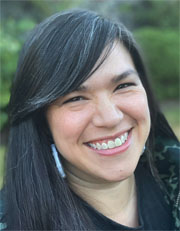 Director of Racial and Gender Justice

In September 2020, Kasi Marita Perreira (she/her) was named Director of Racial and Gender Justice, a new staff position at the Washington State Labor Council, AFL-CIO dedicated to leading the council’s work in challenging all of Washington’s labor movement — union leaders, staffers and rank-and-file members — to understand our collective responsibility and stake in advocating for racial and gender justice. In addition to this education work, she is also flagging problems, including problems within the movement as well as between organized labor and other social movements.

Perreira is an organizer, artist, loving partner and mama of two. She joined the WSLC after 15 years of organizing working people from the Bay Area to North Carolina with the United Food and Commercial Workers (UFCW), and a lifetime of advocating for social justice. As Organizing Director at UFCW 21, she focused on member-led, equitable leadership development and helped to bring thousands of members into her union.

“It is immediate and imperative that we listen to those who have themselves experienced disproportionate oppression for being Black, Female, Non-gender conforming, Queer, Immigrant or ‘Other’,” Perreira said. “We need to find more fearless White Allies/Freedom Fighters in our ranks. I am also very aware that as a movement we have differing views, but as the Race and Gender Justice Director, I can commit myself to listening to everyone, and to help us find our path.”

Thank you self respecting people reading this! Thank you Duwamish, thank you Coast Salish, indigenous people of this land. I am called Heen Shawat, which means Water Woman in my ancestors’ language Łingit. I am called Kasi Marita Perreira in English. I am of the eagle moiety. Our clan house is bear.

For more information about the WSLC’s work in this critical area, visit the Race and Labor page. Contact Kasi Perreira at kperreira@wslc.org or by calling 206-486-0451.