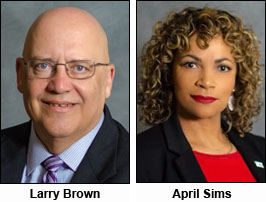 On Jan. 7, 2019, Larry Brown was sworn in as President and April Sims as Secretary Treasurer of the Washington State Labor Council, AFL-CIO, after being elected by WSLC-affiliated unions in December. They begin four-year terms as the executive officers of the state’s largest union organization, representing more than 600 labor organizations with some 450,000 rank-and-file members.

Read all about their historic swearing-in ceremony of the new WSLC officers right here at The Stand.

The WSLC was formed in 1957 with the merger of the Washington Federation of Labor and the Washington Congress of Industrial Organizations Council. The executive officers since that time have been: