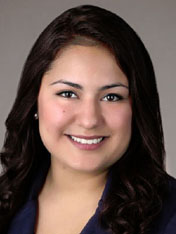 As the WSLC’s Union, Community & Naturalization Organizer, Dulce Gutiérrez works out of the Yakima and South Central Counties Central Labor Council office (507 S. 3rd St., Yakima) on labor and community issues affecting workers and their families in the Yakima Valley, with a focus on building power and unity among Latino and union working families. Her goal is to motivate and empower people to be effective advocates in the community, along with coordinating coalition efforts that strategically and positively impact the quality of life in the Valley for union and Latino families. Her work includes providing naturalization legal services in Yakima Valley.

Dulce grew up in East Yakima, an economically disadvantaged area of the city. At A.C. Davis High School, she was awarded the Bill & Melinda Gates Achievers Scholarship, which gave her the opportunity to become the first woman in her family to attend a university. After earning a B.A. at University of Washington, Dulce returned to her hometown and became active in local political and public service organizations in her old neighborhood, while working as an operations manager at Yakima Valley Hops. In November 2015, Dulce was elected to serve on the Yakima City Council. She was among a group of three women to become the first Latinos ever elected to serve on that council.