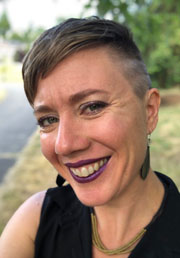 Chapman first joined the WSLC in June 2018 as Statewide Public Sector Organizer, convening and staffing the Washington Works Together table of public-sector unions. In her new role, she will continue that collaborative work while also providing support to individual unions and their organizing drives. She will also support regional AFL-CIO Central Labor Councils’ efforts to build capacity across the state.

Born in Seattle and raised in Yakima, Chapman has 20 years of labor and social justice organizing experience that began with her involvement as a young leader of the global justice movement that mobilized for the World Trade Organization protests in 1999. After working seven years as a carpenter in Oakland, Chapman began her labor career as a rank-and-file members of UAW Local 2320, which represents workers in federally-funded legal services programs. She went on to serve as the UAW’s WA State Deputy Campaign Manager and was a founding Steering Committee member of the Washington Immigrant Solidarity Network.

Chapman founded and spent five years with the Alabama Coalition for Immigrant Justice where she built a strong statewide network of immigrant leaders, labor, faith, community groups, civil rights and advocacy organizations to fight back against and successfully gut the nation’s most aggressive state anti-immigrant law, HB 56. She founded and led for a decade the Catalyst Project based out of San Francisco, where she worked with hundreds of organizations to build bridges across cultural and race lines, to collectively challenge institutional racism.