In Support of Strong Unions After Janus Decision 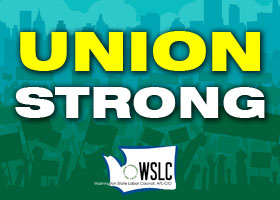 With its decision on Janus v. AFSCME, the U.S. Supreme Court has overturned more than four decades of legal precedent by declaring fair-share fees for public sector workers to be unconstitutional. This case is not about free speech. It is an effort to divide and conquer working families and take away their power to join together and negotiate for fair wages and working conditions.

I pledge to continue standing with Washington’s union members and their families. Together, we will demonstrate that no court decision can extinguish the necessity of working people to stand together in strong unions. When we join together and fight for what is right, amazing victories are achieved. We will redouble our efforts at the local levels of government to raise wages, ensure all workers have paid sick days, enact paid family leave, protect immigrants on the job, strengthen workplace safety, fund public education, and much more.

As elected leaders in Washington state, we stand shoulder to shoulder with union families not only to condemn this decision, but to amplify the need for strong unions to fight back against an economy that’s rigged to the advantage of the wealthy and powerful.

ELECTED OFFICIALS WHO HAVE SIGNED