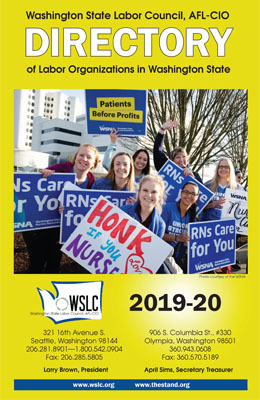 Here is the latest edition of the Washington State Labor Council’s Directory of Organizations.

Following are links to the websites of local unions affiliated with the Washington State Labor Council, AFL-CIO (and their international unions) and a summary of the types of workers they represent. If your affiliated union is not listed, please send us your web address. Most of today’s unions represent a wide variety of occupations and trades, some of which may not be listed here.

Bakery, Confectionery, Tobacco Workers, and Grain Millers International Union is a modern union with old-fashioned values, dedicated to giving workers in its industries a voice and a vote in their workplace.

Bricklayers and Allied Workers, International Union of — Workers/masons who cut, bond and install stone and brick for a wide variety of structures.

Electrical Workers, International Brotherhood of — Electricians working in all phases of construction and service, commercial and residential.

Engineers, International Association of Professional and Technical — A wide range of occupations including engineers, drafters/designers, computer operators/programmers, inspectors, legal workers, planners, nurses, public relations officers, scientists and many others in both the public and private sectors.

Glass, Molders, Pottery and Plastics and Allied Workers International Union — Workers in a broad scope of industries, including fine china, glass and plastic containers, insulation, sanitary ware and other related products and services.

Heat and Frost Insulators and Asbestos Workers, International Association of — Workers who apply insulation materials to pipes, tanks, boilers, ducts, refrigeration equipment and other surfaces requiring thermal control, or who do removal of asbestos-containing material.

Iron Workers, International Association of Bridge, Structural and Ornamental — Workers who assemble and erect steel framework and other metal parts in buildings, on bridges, dams and other steel structures.

Marine Engineers‘ Beneficial Association (MEBA) — Marine engine and deck officers, and crew of the most technologically advanced ships in the U.S.-flag fleet, including cruise ships, tankers, vessels on the Great Lakes, and container ships. Members also sail aboard government-contracted ships of the U.S. Navy’s Military Sealift Command and the Maritime Administration’s Ready Reserve Force, on tugs and ferry fleets around the country, as well as fireboats, and in various capacities in the shoreside industries.

Masters, Mates and Pilots, International Organization of — Licensed Deck Officers, state pilots and other marine personnel on U.S.-flag commercial vessels sailing in international trade; the inland waterways and Great Lakes of the United States; the Panama Canal and Caribbean, as well as crews sailing civilian-crewed military vessels of the United States.  The MM&P’s Pacific Maritime Region represents employees of the Washington State Ferry System. (The MM&P is the International Marine Division of the International Longshoremen’s Association, AFL-CIO.)

Musicians, American Federation of — The largest organization in the world representing the interests of professional musicians. Whether negotiating fair agreements, protecting ownership of recorded music, securing benefits such as health care and pension, or lobbying our legislators, the AFM is committed to raising industry standards and placing the professional musician in the foreground of the cultural landscape.

Nurses Association, American — The American Nurses Association represents the interests of the nation’s 4 million registered nurses (RNs) through its constituent and state nurses associations and its specialty nursing and affiliate organizations that currently connect to ANA as affiliates.

Operating Engineers, International Union of — Heavy equipment operators, mechanics, and surveyors in the construction industry, and stationary engineers, who work in operations and maintenance in building and industrial complexes. The IUOE also represents nurses and other health industry workers and public employees.

Plasterers and Cement Masons, International Association of Operative — Workers who finish the interior walls and ceilings of buildings, apply plaster and/or cement on masonry, metal, wire lathe or gypsum, and pour/finish/repair concrete slabs, steps, walls, gutters, sidewalks and other paving.

Plumbing and Pipe Fitting Industry, United Association of Journeymen and Apprentices of the  — Multi-craft workers engaged in the fabrication, installation and servicing of piping systems.

Pulp and Paper Workers, Association of Western — Represents more than 4,000 workers at pulp and paper mills in Oregon, Washington, Idaho, California and Virginia. Formerly independent, it’s now an autonomous division of the United Brotherhood of Carpenters.

Roofers, Waterproofers and Allied Workers, United Union of — Workers engaged in all aspects of roofing and waterproofing buildings and shelters.

Sailors Union of the Pacific, Seattle

Service Employees International Union — The SEIU represents workers in healthcare, property services, and local and state government. The SEIU is no longer affiliated with the national AFL-CIO, however the following union local has signed a Solidarity Charter to retain its affiliation with the Washington State Labor Council:

Steelworkers, United (USW) — Workers in steel, aluminum, can, mining, manufacturing, pharmaceuticals, energy and utilities, paper and forestry products, health care, chemical and other industries, but also workers in retail, service and public sectors. Also, workers who make paper and refine oil, chemicals, nuclear materials, pharmaceuticals, automobile and truck parts, appliances and many other products.  The USW merged with PACE (the Paper, Allied-Industrial, Chemical and Energy Workers) in 2005 to form the largest industrial union in North America. PACE was formed 1999 by the merger of the United Paperworkers International Union with the Oil, Chemical and Atomic Workers International Union.

Teamsters, International Brotherhood of — The union represents “everyone from A to Z — from airline pilots to zookeepers.” The regional chapter that covers Washington and Alaska is Teamsters Joint Council 28. The Teamsters union is no longer affiliated with the national AFL-CIO, however the following union locals have signed Solidarity Charters to retain their affiliation with the Washington State Labor Council:

Transportation — The United Transportation Union is a broad-based labor union representing about 125,000 active and retired railroad, bus and mass transit workers in the United States and Canada.

UAW — The International Union, United Automobile, Aerospace and Agricultural Implement Workers of America (UAW) is one of the largest and most diverse unions in North America, with members in virtually every sector of the economy. UAW-represented workplaces range from multinational corporations, small manufacturers and state and local governments to colleges and universities, hospitals and non-profit organizations. The UAW has about 640,000 active members and over 500,000 retired members in the United States, Canada and Puerto Rico.

Writers Union, National (UAW Local 1981) — The only labor union that represents freelance writers working in all genres, formats, and mediums. Through its parent union, The United Auto Workers, the National Writers Union is a member of the AFL-CIO. The NWU works to advance the economic status and working conditions of writers.